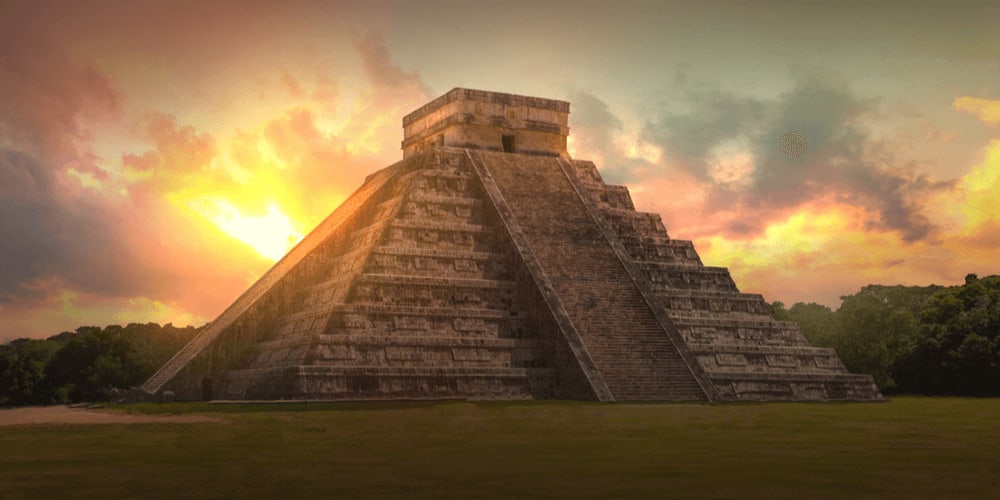 The Maya civilization, one of the most notable civilizations of Mesoamerica, occupied the areas of modern Guatemala, Mexico, Belize, Honduras, and El Salvador. It is believed to originate approximately 2000 BCE. It’s only natural that the Maya peoples fascinated with astronomy and celestial mechanics developed advanced mathematical practices and a sophisticated numeral system.

The Maya developed a base-20 numeral system using only three different systems to represent various numbers:

- An upside-down turtle shell was used to represent “zero.” The Maya peoples are believed to be the first to use “zero” as a place-holder.

Therefore, the Maya numeral system is sometimes called the bar-and-dot system. Some scientists argue that it is based on finger-counting since a human has 20 fingers – 5 (a bar) fingers on each hand and 5 toes on each foot.

Number 20 was not expressed by four bars placed one above the other as you might think. The Maya represented in with a dot placed high above a turtle shell. To write larger numbers, they used powers of the twenties. Thus, 30 was represented as 20 (a “high” dot) +5 (a bar) + 5 (a bar) while 40 was expressed as 20 (a “high” dot) + 20 (a “high” dot) placed above a turtle shell. In fact, the Maya could write any number they wanted using their sophisticated numeric system. For example, 5124 could be represented as 12x20x20+16x20+4, or 2 dots placed above 2 bars that are placed above 1 dot that is atop three lines that are placed above 4 dots. Although the system seems to be extremely complicated, it has an obvious advantage – the Maya could express any number using only three symbols (a turtle shell, a dot, and a bar).

Quick math quiz
Time to boost your math skills
Play Quiz
Prehistoric Mathematics
Here is our first article devoted to the history of mathematics. The article contains the analysis of the development of the numeral system in the prehistoric era and four main stages of the “number” concept evolution.
Greek Mathematics
Greek mathematics was mostly based on geometry; it’s therefore only natural that their most influential contributions to modern mathematics are related to geometry
MATH QUIZZES
Welcome to the world of recreational Math!
PLAY
We use cookies to improve your experience on www.mathandmind.com and to show you relevant content and advertising. To find out more, read updated Privacy Policy
OK