What is an IQ Test? 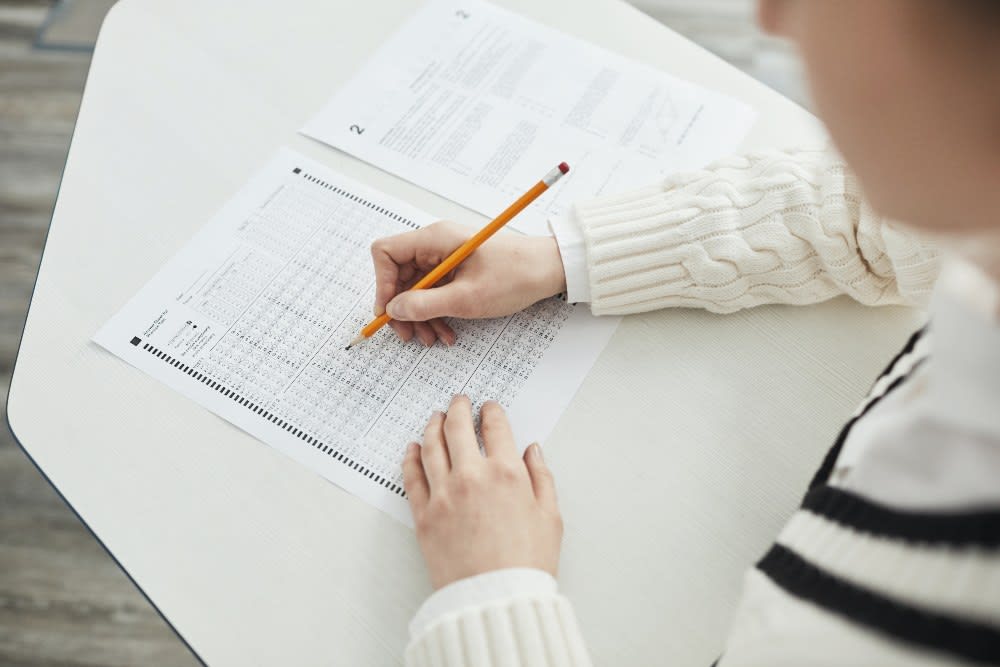 An IQ﻿﻿ (intelligence quotient﻿) test is a standardized test specially developed to test an individual's intelligence. Most IQ tests are designed to focus on logic and reasoning ability.

The test is called the intelligence quotient test because the early method used to calculate the results divided a person’s mental age by their chronological age. This value was then multiplied by 100. For example, if a 10-year-old tests at a 10-year-old level, their quotient is 1.0, and their IQ﻿ is 100. The scoring method has since changed. You will learn more about it in a few minutes.

History of the IQ Test

Sir Francis Galton and James McKeen Cattell both made early attempts at measuring intelligence. These early forms, developed in 1884 and 1980, were very primitive and inaccurate at measuring reasoning ability. The first IQ test that proved reasonably accurate in measuring intelligence was developed by Alfred Binet in 1905. Historically, Binet created the IQ test to identify children that were falling behind their peers in school.

While Binet developed his IQ test for students in France, an eager teacher, Henry Goddard, translated the test and started administering it to his students. The test quickly spread throughout American public schools.

The Binet IQ test became more widely used when it was revised by Lewis Terman in 1916 and renamed the Stanford-Binet test. The test was more accepted when Terman began multiplying the intelligence quotients by 100. An IQ of 100 seems more intuitive than 1. While this test was also developed for children, almost 2 million soldiers took it during World War I.

Eventually, it became clear that dividing mental age by chronological age did not effectively gauge adult intelligence. To accurately calculate the IQ for adults, David Wechsler set the average adult IQ to an arbitrary 100 points. One standard deviation below or above the average was 15 points lower or higher. This effectively removed ‘quotient’ from the intelligence quotient (IQ) test, but the name was already ubiquitous and stuck. Wechsler's changes to scoring also stuck and are still used today.

It’s important to select a test that has been designed with the specific test taker in mind. A psychologist can help identify which test is best suited for you, but many of these tests are also available for purchase online.

Any 10-minute free online IQ test is not a recognized or real form of IQ testing. These tests can be fun﻿ and even challenging﻿﻿, but without testing and research, the results are likely to be wildly inaccurate.

What is the IQ Test Based On?

As mentioned, the best methods for testing an individual's IQ have been controversial.  Most psychologists recognize four major categories of intelligence:

Careers for those with high verbal intelligence include journalists, lawyers, writers, librarians, and researchers.

Logical intelligence is the ability to use reason to analyze situations and solve problems. Those with average or above-average spatial intelligence will perform well on questions involving cause-and-effect, abstract concepts, analysis, and problem-solving. Individuals with logical intelligence also tend to score well on numerical questions.

Careers for those with high logical intelligence include lawyers, scientists, detectives, doctors, and computer programmers.

These four major categories are the basis for question formation in the most popular IQ tests. Often two types of intelligence are combined into one question, e.g., mathematical word problems test both verbal and numerical intelligence.

What is a Good IQ Test Score?

What IQ score signifies an average IQ? A good IQ? And what about a genius IQ? Before answering these questions, you need to understand what the IQ test ranges mean.

As briefly mentioned before, modern IQ tests have placed the average adult IQ at 100. IQ test scores use a normal distribution or Bell Curve. The further away from the mean or peak of the curve, the more unique your score is. A standard deviation of 15 is used, meaning 68% of test-takers will score within 15 points of 100. 50% of the population will score between 90-110 on an IQ test. 15% will score between 111-120, while another 15% will score between 80-89.

IQ Score ranges can be broken down as follows:

A genius IQ score is assigned to individuals with a score over 160. Less than 0.25% of the population falls in this category. While Albert Einstein never took an IQ test, researchers believe his IQ was approximately 160.

Recently, the problematic history of IQ testing has been brought into the light. Many prominent psychologists involved in creating and revising IQ testing methods also held some problematic and immoral stances concerning intelligence. While the initial purpose behind IQ tests was ethical, eventually, they were used immorally.

Eugenicists like Lewis Terman and Henry Goddard argued that those with low IQs should not be allowed to procreate. They felt that they should be institutionalized or forcibly sterilized by society to prevent low intelligence from spreading. Racists and ethnocentrists tried to manipulate IQ data to argue that ethnic minorities had lower IQs because of their race. IQ tests were used to support their beliefs that evolutionary differences and inferiority existed.

Psychologists have historically argued about the validity and reliability of IQ testing. Intelligence is fluid, and humans are learning new concepts and skills every day. Some psychologists believe that IQ tests cannot be universally applied because of different cultural differences that could lead to differences in specific skills.

Ultimately, modern IQ tests have been extensively studied and tested. The tests are regularly revised based on statistical information. Researchers identify questions that are unfair and better sculpt them for the general public. IQ tests are based on statistical models. Every few years, they are recalibrated because of psychologist and philosopher Jim Flynn’s findings on the increase in the average IQ over the years.

How to Boost Your IQ Test Score

You may want to know how to improve or boost your IQ test scores. A high IQ can provide a major sense of pride, even if kept to oneself. There are many resources on the internet that offer advice on how to get a high IQ test score. A natural approach to improving intelligence works best. To improve your skills in the four major categories:

If you have spent some time with these activities and working on verbal, spatial, numerical, and logical skills, you may be ready to take an IQ test and see where you fall!

Discover your intellectual power!
Take this fun and quick test and evaluate your performance in the major areas of intelligence.
Play Quiz
What is an IQ Test?
IQ tests are a fascinating way to study and test human intelligence. Learn the origins and history of IQ tests, the methods developed to test intelligence, the multitude of available IQ tests, what your IQ test score means, and how to improve your IQ test score!
Life Path Number: the Right Way to Live Your Life
See how your life path number influences your life!
MATH QUIZZES
Welcome to the world of recreational Math!
PLAY
We use cookies to improve your experience on www.mathandmind.com and to show you relevant content and advertising. To find out more, read updated Privacy Policy
OK